In the Review, you can display multiple levels of the deconvolution in the modeling. By default, only the data, as fitted, are displayed.

In the Lower Plot dropdowns, you can select the main plotted entity and up to three additional levels of deconvolution.

State-1 - if this is a two state model (two densities comprise the ZDD), this will display the primary density component of the overall model (experimental)

State-2 - if this is a two state model (two densities comprise the ZDD), this will display the secondary density component of the overall model (experimental) 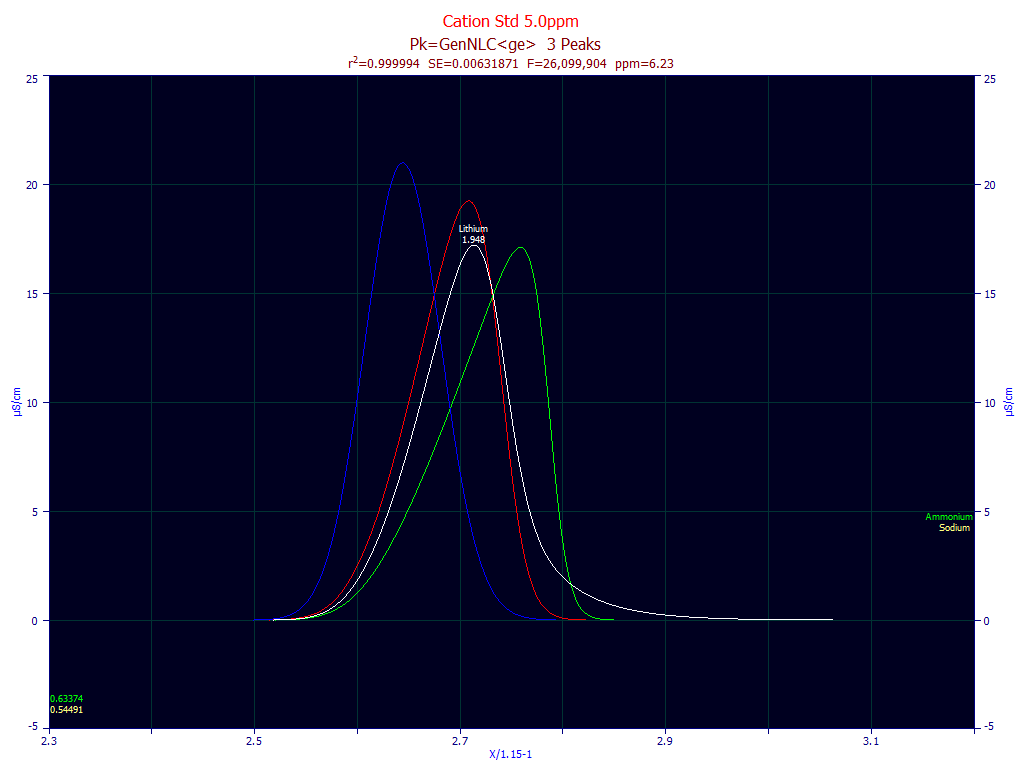 By default, the progression of the three additional levels follows a RGB (red-blue-green) color scheme. In the above Review plot, the white curve is the data, as fitted. The red curve shown above is the fitted peak minus the IRF or instrumental distortion. The data are from a modern instrument and a routine analytical concentration and is not atypical of the considerable influence of instrumental distortions. The green curve in this plot is the theoretical Wade-Thomas NLC, the "partial" deconvolution, removing both instrumental and intrinsic nonidealities, but not the concentration dependent chromatographic distortion. The blue curve is the fitted Giddings, the ZDD peak that would be expected at infinite dilution, the "full" deconvolution.

Whether you wish to regard the blue Giddings or the green NLC as the 'true' peak depends on whether or not you wish to remove the influence of the concentration-dependent a3 chromatographic distortion.

In this example, all three of the deconvolution levels are dramatically different from the white curve, the peak eluting from the instrument.

To summarize, one starts with the white curve, removes the instrumental distortion, and the red IRF-deconvolved data is realized. One then takes this data absent this instrumental distortion convolution, and the intrinsic non-idealities are removed; the red curve becomes the green one, the pure theoretical chromatographic peak described by this model. One can then derive the peak at infinite dilution; the green curve becomes the blue one.

PFChrom can report the Deconvolved Moments in the Numeric Summary. The moments for each of these four curves shown above will be available.