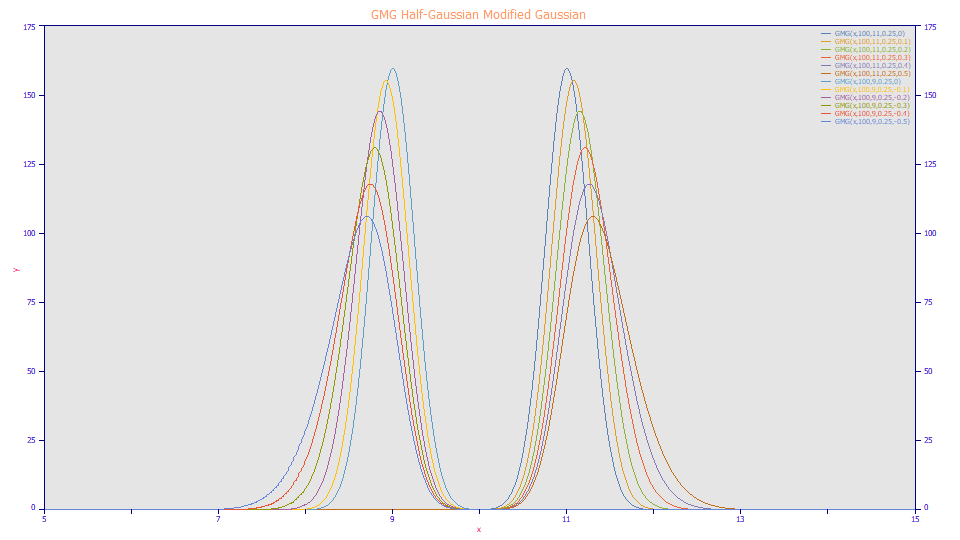 The GMG model was offered in the previous version as an alternative to the EMG for basic modeling of chromatographic tailing. Even at that time, the detectors were seeing improvements where the non-Gaussian distortion was empirically better described by a half-Gaussian IRF than the exponential IRF of the EMG.

The GMG is the mathematical convolution of a Gaussian with a one-sided Gaussian response function. There are only two components to this model, a primary Gaussian, and this one-sided Gaussian which convolves or smears the Gaussian as in the profiles above. As the magnitude of this half-Gaussian component increases, peaks become more asymmetric.

Let us look at the GenHVL<ge> or GenNLC<ge> models, the two most useful pre-IRF deconvolution models in the program:

The ZDD is generalized or extended to model the non-idealities in the actual chromatographic separation. The common chromatographic distortion, a3, is applied to this ZDD to manage the concentration dependent fronting and tailing, and this peak is convolved with the <ge> IRF (it having both a probabilistic and kinetic instrumental distortion). The model is directly fitted as a convolution integral in the Fourier domain.

From this perspective, the GMG can be seen as a rudimentary specialization of the GenHVL or GenHVL models. We would designate the GMG as a Gauss<g> convolution model. There is no ZDD insofar as there is no intrinsic chromatographic distortion in the model. Further, there is no generalization of the Gaussian to alter the non-Gaussian character of the intrinsic chromatographic peak. There is the <g> IRF convolution, however, the half-Gaussian decay IRF.

The GMG was attractive since this model was capable of fitting close to to Gaussian peaks with the tailing modeled by the half-Gaussian convolution. The GMG was simple to compute, the convolution having a closed form solution. The GMG thus makes no accommodation of intrinsic fronting or tailing, nor is the issue of a non-Gaussian shape at infinite dilution anywhere addressed. An external distortion is modeled, but only this one-sided normal decay sometimes attributed to axial dispersion, but which would model, generally poorly, every deviation from the Gaussian in the overall peak shape. Like the EMG, the GMG was generally useless with the fronting and tailing seen at higher solute concentrations.

The GMG is included in PFChrom only for historical reference and for research purposes. Its primary use in PFChrom is as a GMG ZDD in the GenHVL[G] and GenNLC[G] models.

The HVL<irf> and NLC<irf> convolution models are likely to be far more useful than the GMG, and those are inferior to the GenHVL<irf> and GenNLC<irf> models which manage can isolate the intrinsic nonidealities in modern chromatographic data. Given the ease at which these far more effective models can be fitted in PFChrom, and removed once quantified in a deconvolution step prior to fitting, we cannot any benefit to a continued use of the GMG as an independent peak model, although it has proven quite useful as a ZDD in the generalized models.

In the GMG, the intracolumn band broadening processes such as axial diffusion, dispersive effects, mass transfer resistances, and slow kinetics of adsorption of desorption are assumed in the aggregate to distribute or broaden the solute as an external half-Gaussian convolution. In our experience, it is not a good choice to treat these effects as a convolution implemented after the chromatographic distortion has already been applied. These effects need to be addressed prior, in a ZDD that precedes the application of the chromatographic distortion.

Note that no intracolumn effects are actually modeled by the a3 parameter. Indeed, to assume that any form of intracolumn-originated asymmetry can be independently attributed to something as rudimentary as a half-Gaussian convolution decay model seems a vast oversimplification.

When treating the half-Gaussian component as an IRF, only tailed peaks can be modeled. To enable the GMG to be used as an empirical function for fronted peaks, the GMG is bidirectional and can accept -a3 widths.

In a convolution model, the parameters actually represent a true deconvolution of different physical system responses. Fitting an analytical form for a convolution product is also the finest form of deconvolution in that, unlike discrete Fourier procedures, no noise is introduced into the data. Another way to state the GMG is Gauss(a0, a1, a2) (x) Half-Gauss(a3). As such, the fitted parameters directly produce the deconvolved Gaussian and deconvolved half-Gaussian response function SD. Because convolution of an instrument response function is area invariant, one simply assumes that Gauss(a0, a1, a2) represents the true peak (the peak with all non-idealities removed).

The higher moments of the convolved product cannot be assumed to have any significance, but the moments of the deconvolved Gaussian are as significant as the fit, where a1 represents the centroid or first moment, and a2 represents the standard deviation or square root of the second moment. Assuming the time scale of the data has been pre-transformed with the X=X/t-1 calculation, a1 also represents the true thermodynamic capacity factor k’. As with all models, the degree to which parameters can be judged significant must be in proportion to the quality of the fit.

The nature of the GMG model, as in all <irf> fits, suggests that a single a3 should be shared across all peaks since it should represent an invariable time constant for the instrumental distortions. When a3 is varied in order to account for peak shape differences across the chromatographic data, you are in effect fitting an empirical model, or at best a dubious estimate of non-idealities, and you should no longer assume any significance for the parameters.