The Gen2HVL model is a further generalization of the GenHVL model. The twice-generalized 'Gen2' ZDD allows both the skew, the third moment, and the kurtosis, the fourth moment or 'fatness' of the tails to vary. The Gen2HVL model is important in fitting the gradient peaks in HPLC, and preparative peaks with their high overload shapes.

By inserting the Generalized Error Model ZDD for the PDF, CDF, and CDFc in GenHVL template, we produce the Gen2HVL model:

The Gen2HVL model with a4=2 (the specialization for the exp(-z2) Gaussian tailing) reduces to the GenHVL model.

The Gen2HVL uses the generalized error ZDD where a1 is the mean of the deconvolved asymmetric generalized normal within the ZDD. For an a4 power=2.0 decay, this will be the mean of the deconvolved zero-distortion peak. The GenHVL[Y] model uses the [Y] generalized error ZDD where the a1 center value is the fully deconvolved Gaussian mean. Use the GenHVL[Y] if you wish a full statistical deconvolution where the Gaussian mean is directly fitted and you want its specific confidence bands. Both produce identical shapes.

The following plot illustrates the use of the Gen2HVL for gradient HPLC peaks. The introduction of the gradient changes the decay of the peak, in general producing a decay that is more compact than would occur absent the gradient. In the plot below a fronted and tailed peak is shown for an a4 decay power that varies from 2.0 to 2.25, where 2.0 is an exp(-z2) decay. A well-designed gradient HPLC peak might be expected to have an a4 in the range of 2.1-2.2.

Note that we have observed non-gradient analytic peaks to often have a power between 1.96-1.99 when the Gen2HVL model is fitted, indicative of a very slight 'fattening' or dilation of the tailing. Any benefit associated with including the kurtosis in an analytic non-gradient peak is likely to be modest, if it exists at all. Please check the F-statistic of the fit of the Gen2HVL model against the F-statistic for the GenHVL model to ensure there is an actual improvement in the modeling power. Do not look specifically at an improvement in the r2 or ppm unaccounted variance. The Gen2HVL F-statistic will increase in contrast with the GenHVL model when this adjustment to the fourth moment is statistically significant.

Using the Gen2HVL for Preparative Peaks

When the a4 power is close to 1, the ZDD approaches a double sided exponential or Laplace density and it can replicate a host of high overload preparatory chromatography peak shapes. When using the Gen2HVL to approximate the extreme overload shapes, the a5 asymmetry mainly controls the shape of the envelope as in the plot below. 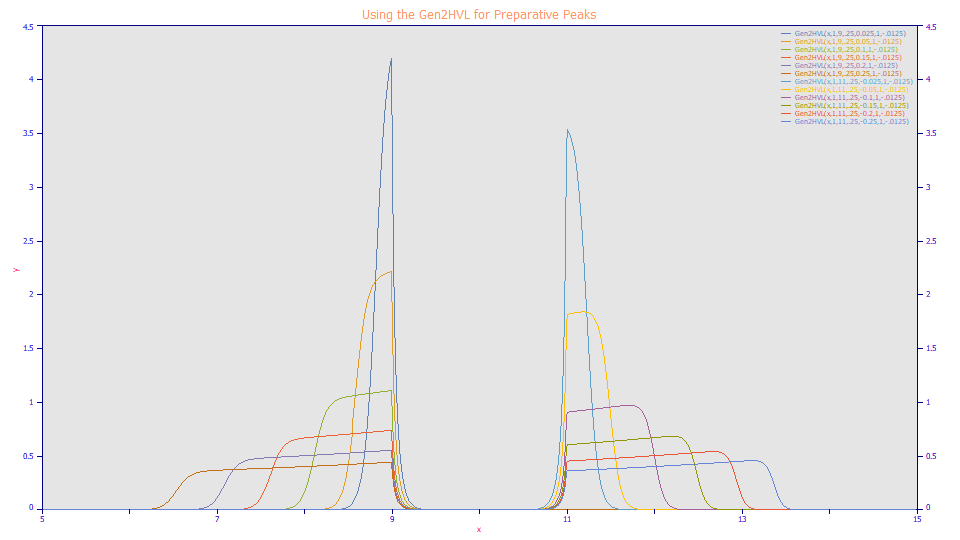 While the Gen2HVL can approximate such high overload shapes, you should regard this as an empirical model only. A Laplace ZDD (a4=1) density has a discontinuous first derivative at the apex, something unlikely to exist in any real-world chromatographic peak at infinite dilution. A Gen2HVL fit will, however, offer parameters which may give you more useful estimates of the higher moments of such peaks, absent the overload, which you may be able to tie to column health.

Note also that the program offers a GenHVL[Yp] model, based on the GenHVL[Y], specially designed for fitting high overload preparative peaks where am envelope occurs as in the higher distortion examples in the above plot. There is also a GenHVL[YpE] model which assumes the envelope is fully developed and the Laplace density is applicable. It is also designed to furnish starting estimates tailored for preparative peaks.

When a4=2 and a5=0, the ZDD becomes a Gaussian and the model reduces to the HVL.

When a4=2, the ZDD becomes a generalized normal and the model reduces to the GenHVL.

As should be apparent from the plots above, two very different estimation algorithms are needed for the gradient and high overload assumptions. One assumes a more compact decay and the other an extremely elongated one. You may wish to use the Gen2HVL for HPLC gradient fits, and the GenHVL[Yp] model for fitting high overload shapes. The GenHVL[Yp] is mathematically identical to the GenHVL[Y] but generates starting estimates that assume a high overload state.

The GenHVL[YpE] model directly uses a Laplace ZDD (there is no power of decay adjustment-a power=1 exponential decay is used). In high overload experiments, we found the generalized error power converged asymptotically to 1.0. This [YpE] model is faster and may be more robust when fitting very high overload shapes.

This a5 skew adjustment in the ZDD manages the deviations from the Gaussian ideality assumed in the theoretical infinite dilution HVL. This is the statistical asymmetry parameter; small differences in values produce large deviations in analytic shapes. For most IC and non-gradient HPLC peaks, you should expect an a5 between +0.01 and +0.03 (the deviation from non-ideality is a right skewed or tailed).

In gradient peaks, the instrumental distortions may be masked entirely by the gradient. If the IRF is not removed or included in a gradient fit (neither may be possible), the a5 parameter will reflect whatever measure of this IRF this skew adjustment is able to capture. Please note that the a5 adjustment occurs to the skew of the ZDD to which the chromatographic distortion operator is subsequently applied, a very different matter than an IRF convolution integral applied to the end result of the intrinsic chromatographic distortion. The net effect of ignoring the IRF in a gradient fit is to have the a4 understate the compression that is actually occurring in the gradient since it will be diminished to the extent it also accounts the IRF tailing.

This a5 skew adjustment in the ZDD manages the deviations from the Gaussian ideality assumed in the theoretical infinite dilution HVL. This is the statistical asymmetry parameter; small differences in values produce large deviations in shapes. For most IC and non-gradient HPLC peaks, you should expect an a4 between +0.01 and +0.03 (the deviation from non-ideality is a right skewed or tailed).

We have often observed a small modeling power improvement when using the Gen2HVL model with non-gradient analytic peaks. The power is typically between 1.96-1.99, and as such the benefit of adding the kurtosis to the modeling will be small. You should use the Gen2HVL model cautiously for fitting analytic peaks. Use the F-statistic of the fit of the Gen2HVL model against the F-statistic for the GenHVL to ensure there is an actual improvement in the modeling. The Gen2HVL F-statistic will increase in contrast with the GenHVL model when this adjustment to the fourth moment is statistically beneficial. A high S/N will definitely be needed to even see this benefit.

The addition of a shared a4 and a5 parameter to an overall fit can result in orders of magnitude improvement in the goodness of fit.

Both a4 and a5 are measures of the deviation from ideality. Changes in either, in fitting a given standard, may well be indicative of column health. The greater the a5 value, the more the skew is deviating from this Gaussian ZDD assumption of the HVL. For the GenHVL[Y] model, the a4 may be of equally or even greater importance since additional tailing represents a drizzle of sorts that can impact adjacent peaks. You may wish to use the Gen2HVL with a standard and watch for any unexpected changes in either a4 or a5.

Note that the a5 will be most effectively estimated and fitted when the peaks are skewed with some measure of fronting or tailing. Higher concentrations are very good for fitting analytic peaks with this model, assuming that one does not enter into a condition of overload that impacts the quality of the fit.

This model will probably not be effective at all in highly dilute samples with a poor S/N ratio since such peaks will generally have much less intrinsic skew and the tailing will be poorly defined due to inaccuracies in the baseline subtraction.

The Gen2HVL<irf> composite fits, the model with a convolution integral describing the instrumental distortions, isolate the intrinsic chromatographic distortion from the IRF instrumental distortion only when the data are of a sufficient S/N and quality to realize independent deconvolutions within the fitting. For very dilute and noisy analytic samples, you will probably have to remove the IRF prior using independent determinations of the IRF parameters.

Since peaks often increase in width with retention time, the a2 will probably be varied (independently fitted) for each peak.

The Gen2HVL model is part of the unique content in the product covered by its copyright.