By inserting the [G] Half-Gaussian Modified Gaussian (GMG) ZDD for the PDF, CDF, and CDFc in GenHVL template, we produce the GenHVL[G] model:

a4 = The GMG half-Gaussian convolution width

The GenHVL[G] model uses a GMG (half-Gaussian modified Gaussian) ZDD to produce the asymmetry. Note that the GMG and the Skew Normal density used in statistics produce identical shapes. The GenHVL and GenHVL[Z] models thus use one form of an asymmetric generalized normal, and the GenHVL[G] a different one, each producing its own unique type of third moment skew. 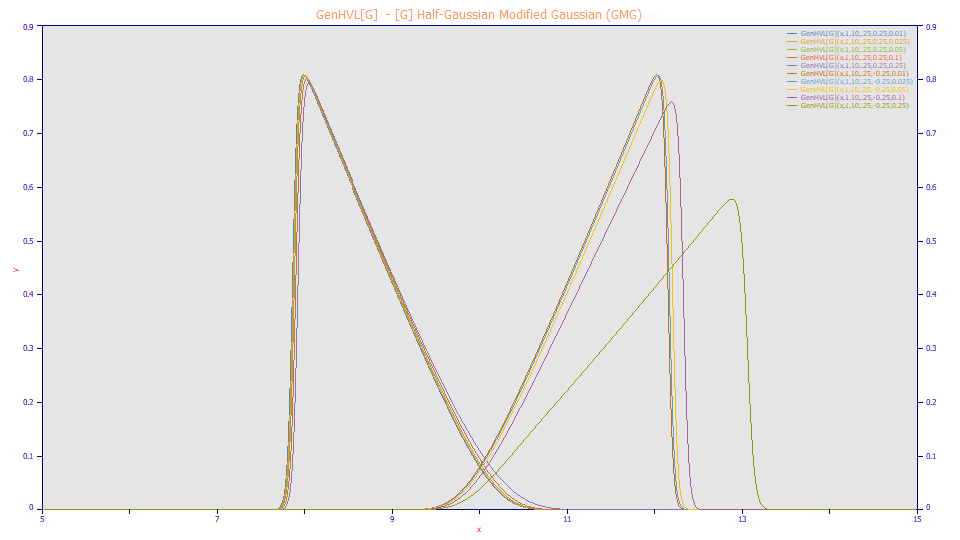 Although the disparity of response in a4 with chromatographic a3 distortion could be corrected by using the statistical asymmetry parameter in the Skew Normal, this GMG parameterization acknowledges the possibility of a theoretical underpinning for a half-Gaussian distortion in the ZDD itself, a measurable real-world probabilistic delay in the ZDD. As suggested by the plots above, the GenHVL[G] a4 parameter will not be easily shared across a chromatogram with both tailed and fronted peaks.

When a4 approaches 0, the ZDD becomes a Gaussian and the model reduces to the HVL. Using discrete Fourier methods, it is not possible to have a zero a4. There will be a built-in limiting point which assures information in a minimum count of Fourier frequency channels.

This a4 GMG convolution width in the ZDD manages the deviations from the Gaussian ideality assumed in the theoretical infinite dilution HVL. Again, note that small widths in an opposite direction to the chromatographic distortion produce large deviations in shapes. For a retention scale, the a4 may be in the vicinity of 0.01-0.05 for analytic peaks . At these values, this positive a4 will produce an increased tailing on tailed peaks and mostly a positional shift on the fronted peaks.

This may be an instance there a4 cannot be assumed constant (shared) across all peaks in the chromatogram.

The a4 can be an indicator of not only the deviation from this Gaussian ideality, but of the actual probabilistic width of this additional distortion in the ZDD. Changes in the a4, in fitting a given standard, may be especially indicative of column health, assuming this model is able to accurately represent the peak. The greater the a4 value, the greater this unwanted intrinsic distortion.

Note that the a4 will be most effectively estimated and fitted when the peaks are skewed with some measure of fronting or tailing. Higher concentrations are very good for this model, assuming that one does not enter into a condition of overload that impacts the quality of the fit.

This model will be least effective in highly dilute samples with a poor S/N ratio since such peaks will generally have much less intrinsic skew.

Since peaks often increase in width with retention time, the a2 will likely be varied (independently fitted) for each peak.

If you are addressing gradient peaks, or the overload shapes of preparative chromatography, you will need the GenHVL[Y] model where the fourth moment of the peak is also adjusted.

The GenHVL[G] model is part of the unique content in the product covered by its copyright.