By inserting the [S] Student's t ZDD for the PDF, CDF, and CDFc in GenHVL template, we produce the GenHVL[S] model:

When a4 approaches infinity, the model reduces to a Gaussian.

The GenHVL[S] only adjusts the kurtosis or fatness of tails associated with the fourth moment of a peak. There is no ZDD skew or third moment component. Unlike the [Q] ZDD, the [S] cannot produce a decay more compact than the Gaussian. 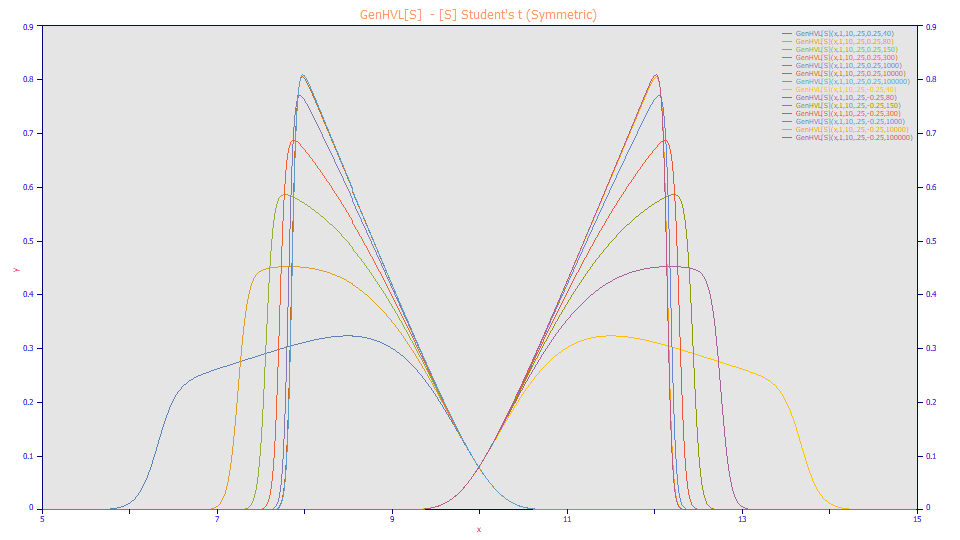 As with the GenHVL[Q], our experience suggests that the [S] ZDD's adjustable kurtosis is mostly applicable to overload shapes since it lacks the skew parameter needed to adjust the third moment for the deviations in the theoretically expected symmetry or asymmetry. For analytic peaks, you will likely want to use a model that adjusts the third moment, such as the GenHVL or GenHVL[Z], or which adjusts both the third and fourth moments, such as the GenHVL[Y]. You should consider the GenHVL[S] an experimental model that may be useful for specific overload shapes.

When a4 approaches infinity, the ZDD becomes a Gaussian and the model reduces to the HVL. Unlike the Student's t assumption where nu>100 is deemed Gaussian, in the GenHVL[S], a4 will need to be 100,000 to approximate the HVL.

This a4 kurtosis adjustment in the ZDD manages the deviations only from a Gaussian tail decay.

We have no experience with whether or not the a4 parameter can be assumed constant (shared) across all peaks in the chromatogram.

Since the a4 is a picture of increased tailing, it may be a useful model for fitting a given standard to ascertain column health. The greater the a4 value, the more a 'drizzle' of sorts is occurring.

Note that the a4 will be most effectively estimated and fitted when the peaks are skewed with some measure of fronting or tailing. Higher concentrations are also very good for this model, and since its function may be to estimate the management of an overload state, the concern for avoiding overload may not apply.

This model will be least effective in highly dilute samples with a poor S/N ratio since such peaks will generally have highly noisy tails which may be poorly modeled.

The GenHVL[S]<irf> composite fits, the model with a convolution integral describing the instrumental distortions, isolate the intrinsic chromatographic distortion from the IRF instrumental distortion only when the data are of a sufficient S/N and quality to realize two independent deconvolutions within the fitting. For very dilute and noisy samples, you will probably have to remove the IRF prior using independent determinations of the IRF parameters. Since the [S] doesn't furnish an intrinsic adjustment of the skew, any deviation from ideality in the ZDD's skew will be addressed only externally by the IRF component of the model, which may not make the slightest sense.

Since peaks often increase in width with retention time, the a2 will probably be varied (independently fitted) for each peak.

If you are addressing gradient peaks, or if the overload shapes of preparative chromatography also need a skew adjustment in the ZDD, you will need the GenHVL[Y] model where the fourth moment of the peak is also adjusted.

The GenHVL[S] model is part of the unique content in the product covered by its copyright.