An analog of the NLC function was originally derived by H. C. Thomas (J. Am. Chem. Soc., 66:1664, 1944) for modeling chromatographic breakthrough curves.

The NLC function was derived under an identical set of assumptions as the Giddings equation, except that no assumption is made about the amount of solute injected. Kinetic rates of adsorption and desorption are assumed to be the primary primary source of band broadening and peak skew. Dispersive and extracolumn effects are assumed negligible. Chemical and diffusive resistances to interphase mass transfer are “lumped” together in a single, dimensionless rate parameter. The equation can model extremely distorted peaks. In the limiting case of an infinitely dilute solute, as the a distortion parameter goes to zero, the NLC model reduces to the Giddings equation.

Under certain unusual conditions corresponding with large a2, the split peak effect, described in the section on the Giddings function, can also be observed.

Assuming the time scale has been properly transformed, the a1 “center” parameter is the true thermodynamic capacity factor k’, the retention time at infinite dilution. With highly tailed peaks, k’ will occur well after the peak maximum. The time transformation can be carried out as follows: X=X/t0 -1, where t is the dead time of the column.

The a2 width parameter is exactly analogous the Giddings equation. It has physical significance in that its inverse is actually a dimensionless time constant:

where kd is the solute desorption constant, and t0 is the dead time of the column.

The a3 distortion parameter can be used to derive the equilibrium constant, and thus the adsorption rate constant as well (since kd is known from a2):

where K is the equilibrium constant for adsorption (ka/kd), and C0 is the amount of solute injected. Using the fitted value k’ (a1) and K, it is then possible to derive the density of adsorption sites on the column which is simply the ratio k’/K.

Note that the GenNLC's a3, in order to share an identical a3 distortion parameter as that of the GenHVL and HVL models, is twice that of the NLC:

The NLC model is most valid, in terms of the physical meaning of its parameters, in liquid affinity chromatography, which is usually characterized by the slow kinetics of solute adsorption and desorption. It may also be used in reversed phase and normal phase HPLC to derive physically meaningful parameters, although this tends to be more difficult in the case of the desorption rate constant.

In liquid chromatography, the NLC offers advantages over the HVL in that it is more likely to give physically meaningful parameters, and it generally produces a better goodness of fit with moderately or highly distorted HPLC peaks.

The Wade-Thomas NLC (Non-Linear Chromatography) model in previous versions of the PFChrom technology was defined as follows:

The computational performance of the NLC was limited since the Bessel function integral was evaluated and the overall function was computed with very close to full machine precision. This model remains available in PFChrom and is listed as the NLC[v4] in the built-in fitting functions and in view functions and user-defined peaks. The NLC[v4] full precision model retains its original +a3 distortion restriction.

These Giddings approximations use a function of a1 and a2 for the a3 asymmetry parameter in the default ZDD asymmetric generalized normal. This work was specific to PFChrom and is presently unpublished independent of PFChrom and its documentation. The Giddings density approximations used in PFChrom are part of the unique content in the product covered by its copyright.

With these fast Giddings approximations, it is a straightforward matter to use the ZDD concepts of generalization to derive a fast full dynamic range NLC approximation.

We will use the GenNLC template with these Giddings PDF, CDF, and CDFc approximations to produce a Wade-Thomas NLC approximation that is capable of a wide dynamic range of both fronted and tailed distortions. With simplification, the NLC (full range) approximation used in PFChrom is as follows:

The NLC and HVL models in PFChrom can be freely used without regard to computational performance or dynamic range of the chromatographic a3 distortion.

This is the dynamic range of the NLC prior to v5 (NLC[v4]). In fitting with the model's derivation, only tailed peaks were allowed. Unfortunately, the loss of precision issues in the NLC, as published and originally implemented in prior versions of the product, occur with tailed (positive distortion) peaks. 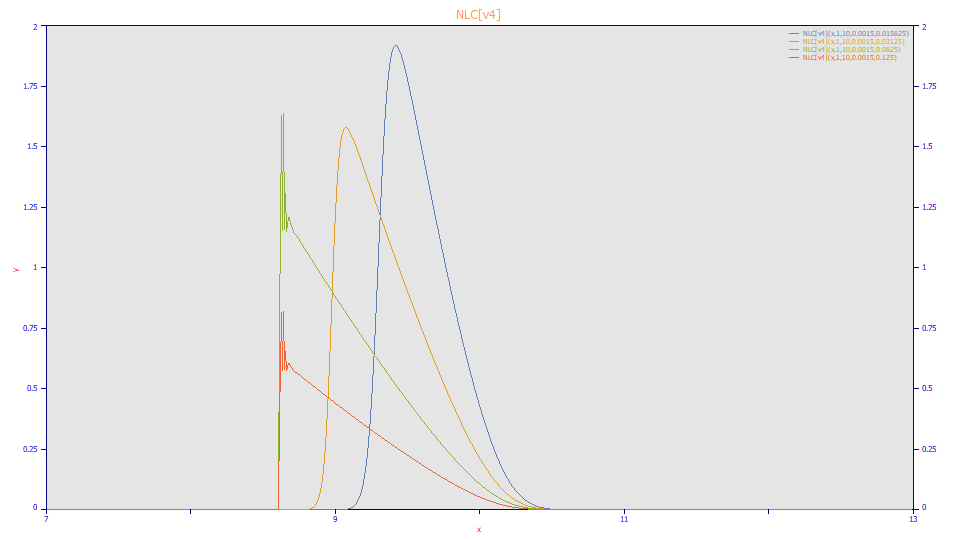 This following plot covers the dynamic range of the above NLC approximation used in PFChrom v5. 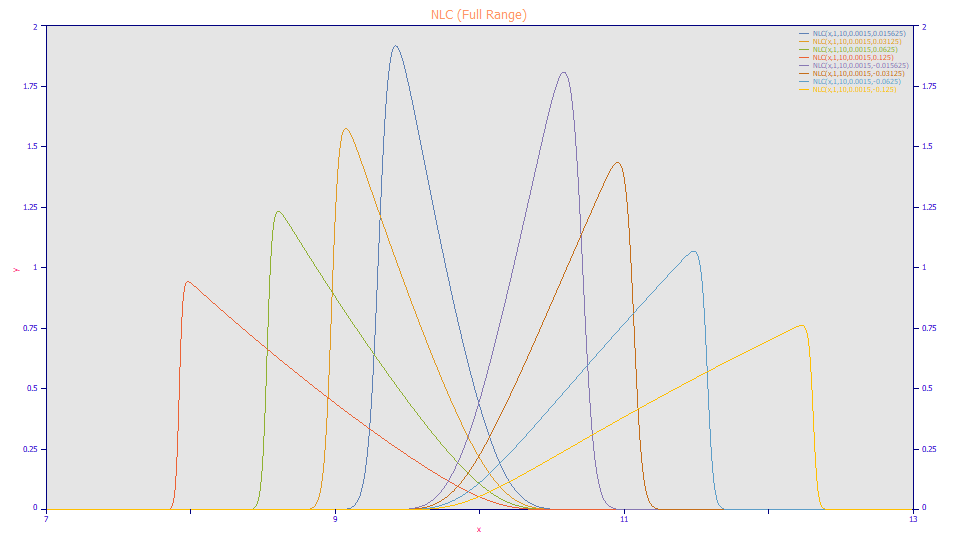 The NLC approximation used in PFChrom and this specific full-dynamic range NLC are part of the unique content in the product covered by its copyright.